By Brady and Auntie Kimberly

Once upon a time, there was a sandwich named Hiro. He was a Gyro sandwich. And he was also a superhero. So he was Hiro the Hero Gyro.

Hiro the Hero Gyro could turn into any type of sandwich!

Hiro’s arch enemy was Sharky, a robotic shark. Sharky could swim in the water or walk on land, and was always getting up to trouble!  But luckily, Hiro the Hero Gyro always managed to save the day!

One time, Hiro the Hero Gyro was supposed to be on vacation from fighting crime.  He went to Coronado, CA and hung out on the beach for a few days.  He was having a great time, but then he heard on his sandwich scanner that a giant robot shark was robbing a bank!

Hiro hopped on to his BolognaMobile, drove to the bank, and rushed inside.  As he suspected, the giant robot shark was actually his nemesis, Sharky.

All of a sudden Sharky, the bank customers, and the bank workers all went “PEEEEEEEYYYYYYEWWWWWW! WHAT IS THAT SMELL???” The smell was SO bad that they all ran out of the bank, and Sharky forgot to take the money with him!

Hiro the Hero Gyro stood by himself in the middle of the empty bank, and thought, “Wow, that was weird! I guess Sharky was too scared to have a battle with me!  Now I can go back to the beach!”

But then Hiro the Hero Gyro started to smell something bad.  He thought, “Now what does that smell like?”

“Wait,” thought Hiro. “I know what it is!  It’s a spoiled egg salad sandwich!”

Then he remembered that he’d changed into an egg salad sandwich that morning, and he’d been hanging out at the beach in the hot sun all day!  And EVERYONE knows that you have to keep egg salad sandwiches cold with a cooler and some ice, because if you leave them out in the hot sun, they will get spoiled and will start to smell like rotten eggs!

“Ha, ha!” thought Hiro. “At least I foiled the bank robbery!”  So he changed himself back into a Gyro and started walking back to the beach.

Later that day, his sandwich scanner buzzed again. A group of tourists were taking the ferry to the U.S.S. Midway Musuem, and a robot shark was trying to sink the boat!

Hiro had a pretty good idea who the culprit was. He jumped in the BolognaMobile and flew to the boat (the BolognaMobile could also fly), and sure enough, he could see Sharky swimming away!  Sharky had taken a huge bite out of the boat, and it was starting to sink!  Hiro needed to act quickly!

Hiro thought for a second and then…

He let his melted cheese ooze into the hole in the boat and kept it afloat until they made it to shore!

Some police officers met the boat by the U.S.S. Midway, and they helped the passengers off the boat.

Hiro the Hero Gyro – still as a Grilled Cheese Sandwich – decided to take a tour of the U.S.S. Midway with the rest of the passengers. Usually, Hiro was very good about staying with the group, but he suddenly saw a door that looked very interesting.

He opened the door and walked into a room. Just as he was realizing that the room was really, really, REALLY cold, the door slammed behind him!  Oh, no! Hiro the Hero Gyro was stuck in the freezer!  Yikes! Of all the sandwiches he could turn into, Hiro did NOT want to be a frozen grilled cheese sandwich!  Because everyone knows that in July 2018, Chef Mommy tried to market a line of frozen grilled cheese sandwiches that would be sold in the the freezer aisle, but kids gave them terrible reviews, and they were pulled from the market!

Hiro the Hero Gyro turned himself into a Panini to try and stay warm. He pounded on the door, yelling “Help! Help!”

Luckily, the Chief of police heard him yelling and opened up the freezer.  As Hiro the Hero Gyro turned back into himself, he said “Thank You” to the Police Chief.

“I had been looking for you”, said the Chief of Police!  “You did great work with foiling the bank robbery and saving the boat, but Sharky keeps escaping. We need a plan to capture him and take him to jail!”

Later that day, Sharky was walking down the street when he saw a sign:

Now, Sharky was super excited. He loved going to Afternoon Tea and drinking fancy tea out of pretty teacups, with beautiful piano music playing in the background. But his favorite thing about Afternoon Tea was the food: TEENY CUCUMBER SANDWICHES, which were his very favorite! And Afternoon Tea was usually super expensive, but this one was free!  It was his lucky day!

When it was finally almost 4:00 p.m., which seemed to take FOREVER, Sharky headed over to 1000 Leaf Street.

He knocked on the door.

“Oh, no” thought Sharky. “I’ve been mistaken for the Land Shark, and now I’m not going to get my TEENY CUCUMBER SANDWICHES!”

Then voice said, “Ha, ha! Just messing with you! I love that Land Shark skit! Come on in!”

Sharky noticed that instead of a grand piano, this tea had a monkey playing the Kazoo.  Even worse, the monkey only knew one song: “In the Tiki Tiki Tiki Tiki Room.” Humph!  So far, this was the WORST AFTERNOON TEA EVER, but Sharky reminded himself that at least it was free.

Sharky sat down at a table with a white lace tablecloth and super fancy dishes. A waiter brought him a pitcher of hot water with a packet of tea leaves inside.  “Your tea will be ready in five minutes!” the waiter said.

After five minutes, Sharky removed the packet of tea leaves, poured some tea into a cup and took a little sip of tea, being carful to hold his little fin out, because that is the polite thing to do when you are drinking tea.  “That’s more like it!” he thought.

Just then, the waiter arrived with a tray that had three levels.  Each level was filled with TEENY CUCUMBER SANDWICHES!  This was a REALLY GOOD Afternoon Tea after all!

This was DEFINITELY THE WORST AFTERNOON TEA EVER, thought Sharky.  I’m leaving! He put the pastrami sandwich back on the tray.

But as he headed out the door, he realized that the door was being blocked by ten police officers!

“You’re going to jail, Sharky!” said the Chief of Police.

Of course, if you haven’t already figured it out, Hiro the Hero Gyro had pretended to be the TEENY CUCUMBER SANDWICHES – and then he turned into a pastrami sandwich, because he KNEW that Sharky did not like them!  His plan was pure genius!

“Don’t you mean THAT’S A WRAP?” Said the Chief of Police.

And the police officers turned around to see that Hiro the Hero Gyro actually WAS a wrap. He’d turned himself into a TURKEY WRAP!

“Hey, Hiro,” said the Chief of Police. “If we need help with any more villains, will you LETTUCE call you?”

Hiro the Hero Gyro turned himself into a hot dog and said:

“Yes, you MAYO! I would RELISH the opportunity to work with you again!”

Well, except for Sharky, who could NOT believe that he was going to jail, and even worse – he had totally fallen for the

Hiro gets eaten by a vicious beast (a human). 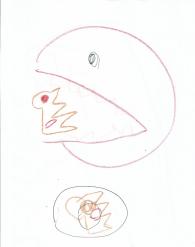 Three hours later…a new hope for Hiro and the rest of Lettuceville! 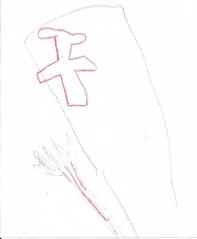 One thought on “Hiro the Hero Gyro”