One day, Brady the Book Sailor walked into the Library with General Mommy to return some books he had read and get some new ones.

Being a Book Sailor meant that Brady could use his Magic Purple Library Card to imagine himself into any book or DVD at the library! He liked to use the Magic Purple Library Card to pick up his friend GrapeBeard the Friendly Pirate, and then they would go visit their favorite characters, like Willy Wonka, George and Harold from Captain Underpants, Luke Skywalker, and LEGO Batman.

Brady put his books into the machine that would check them back in, and then he went looking for Pilke and Padme, the two kids in the Storyvore family.

Padme asked, “Have you done a lot of Book Sailing this summer, since you are out of school?”

“Yes,” said Brady. “But I’ve had SOOOOO much free time, that I’ve already been to all of my favorite books and DVDs over and over and over again. I wish something new would come to the library, so I could have something different to do.”

Then Pilkey, said, “Did you hear about the new Book Sailor rule?”

“Well,” said Pilkey, now you can go into books that aren’t even finished yet! You hold up the Magic Purple Library Card and think, Commander MPLC, take me to a book unfinished!”

When Brady got home, he went to pick up his friend GrapeB, and they closed their eyes and held on to the Magic Purple Library Card and thought, “Commander MPLC, take me to a book unfinished!”

When they opened their eyes, they were in a classroom. All of the kids were working on math homework, but one little boy wasn’t working.  He was squirming in his seat and looking all around and scribbling on his homework (which was already finished) and making a clucking noise like a chicken.

The teacher said, “Braden, you are being a distraction!”

Suddenly, the floor in the classroom started rolling and shaking!  The chairs and desks went flying everywhere, and all of the color drained out of the scene until everything was white except for Braden.

“Yikes”, said Brady, “whoever it is must be super strong!”

Brady and GrapeB each grabbed one of Braden’s arms and pulled him out of the classroom before the white floor crumpled up and disappeared.

“Hi Braden. I’m Brady and this is my friend GrapeB. What just happened?

“I don’t know,” said Braden, “but this keeps happening. It’s really scary! It’s like an earthquake! Are you guys superheroes? Can you help stop them from happening?”

“I’m a Book Sailor, said Brady. But I’ll help you if I can. Do you notice anything weird happening right before the earthquakes?”

“Actually”, said Braden, “there’s a mirror in our classroom, and right before they happen, when I look in the mirror, instead of myself, I see a dragon!”

“Hmmm…that sure is weird,” said Brady.

Then Brady said, “Hey look! Your classroom is re-appearing!”

And sure enough, slowly the classroom was coming back: the desks, the chairs, the students, and the teacher. And they were all back to their regular color.

“Oh, one thing before you go back,” Brady said. “I noticed that you finished your homework early, but you were being a distraction for the other kids who were still trying to finish theirs.  Maybe next time, get up quietly and pick up a book from the bookshelf and read it until everyone else is finished, too.”

“Thanks, good idea!” said Braden. He headed back to his desk.  The kids were all concentrating hard on their homework, but Braden was done.

Braden got up quietly and picked up the book “Charlie and the Chocolate Factory” by Roald Dahl from the bookshelf. He went back to his desk and started reading quietly.  Suddenly, they heard singing: the Hallelujah Chorus from Handel’s Messiah! When Braden looked in the mirror, instead of a dragon, he saw a noble knight! Suddenly, the knight sprouted wings and he started to fly! The entire classroom lifted up and started to flip over upside down.  “Whoa! I’m flying!” said Braden. He gave Brady and GrapeB a thumbs up sign just before the classroom flipped over and disappeared completely.

“Whoa, that sure was weird,” Brady said.

When they looked where the classroom had been, Brady and GrapeB instead saw a playground.

They could see Braden playing all by himself away from the other kids. There was a mirror in the playground (which was kind of a weird place for a mirror). When they looked in the mirror, instead of Braden, they could see a dragon!

Suddenly, the ground started to rumble! The playground rolled and shook and Braden came running towards Brady and GrapeB, yelling, “Help! Help! Help!” They pulled him out of the playground right before it disappeared!

“Thanks for saving me again!” Braden said.

Then suddenly, Brady had an idea.

“Hey, Braden” Brady said. “I just had an idea why those earthquakes are happening! I’m a Book Sailor, which means that I can go into books and DVDs and talk to the characters. But I just found out that I can go into stories that aren’t finished. You must be in a story that isn’t finished yet!”

“I think that when you do something unexpected or when you make a not so good choice, your author crumples up the page that the story is on and throws it in the trash so that you can have another chance to do it right! It’s not an earthquake, it’s a PAGEQUAKE!”

“But when you make a good choice or do the right thing, the page flips over, and you get to start on a new adventure! Next time the playground appears, walk up to the group of kids and ask nicely if you could join them.”

Braden went back to the playground, and did as Brady suggested, walking up to the group and making eye contact and asking politely if he could join the group. When Braden looked into the mirror, he saw a knight! The knight sprouted wings, and as he started to fly, the page began to lift! Braden gave Brady and GrapeB two thumbs up as the page flipped over. 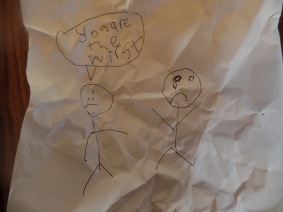 But then, on the next page, Braden said something mean to one of the little boys on the playground. When he looked in the mirror, he could see a dragon. Uh, oh.

Brady and GrapeB pulled Braden out of the playground right before it disappeared.

“OK, said Braden.” I think you might be right about the Pagequakes. But let’s test it out some more.”

“OK,” said Brady, “but let’s test it on some pretend characters, so we aren’t being mean to real people.”

Braden said that was a good idea. So he pretended to steal a banana from a minion, which made the minion sad.

He pretended to use a freeze-ray machine on Gru from Despicable Me.

But then he pretended to find a minion who was sad because he didn’t have a banana and Braden shared half of his.

He pretended he was on a play date, and when his friend asked for a turn with a toy, Braden said “No.”

But then he went back to the play date, and when his friend asked to have a turn with the toy, he said, “Sure!” and handed the toy over.

He pretended to go to the pool, but when his mommy was trying to talk to him, he dunked underwater.

He went back to the pool, and when his mommy called him, he did a great job listening.

Braden pretended to visit the pool again. He splashed another kid at the pool, said something mean to him, and then told the kid he didn’t like him.

PAGEQUAKE! (And this Pagequake was SO huge that Brady and GrapeB almost didn’t pull Braden out of the page before it crumpled!)

But when he went back to the pool, Braden didn’t splash anyone and said really nice things to the other kids.

“Wow,” said Braden, you were exactly right! When I make good choices and follow the group plan and do what is expected, I get to turn into a knight with wings! Now I’m always going to try and do the right thing!”

But on the next page, Braden was at home with his family. He ONLY wanted to do what he wanted to do, and made everyone else watch his favorite movie, Revenge of the Sith.

Brady and GrapeB tried to get Braden’s attention. “Pssssst!” they said. “Maybe you should let the rest of the family do what they want to…”

But the living room started rumbling and shaking, and Braden ran out of the room. Brady and GrapeB caught him right before the…

“You’re welcome,” said Brady, “but you really need to THINK before you do this stuff! Next time you have to make a choice, GrapeB and I might be in some other story!”

So when Braden’s living room re-appeared, he walked back in and decided to let his family watch THEIR favorite movie, Attack of the Clones.

Braden’s parents were so proud of all of the good things that he had done (like quietly finishing his work, asking nicely if he could play with the kids on the playground, listening well, making eye contact, and letting his family decide on the movie), that they told him he had earned an Imaginext Transforming Batcave! Braden was sooooooooo happy!

Brady looked at GrapeB and said, “I think our work here is done! Let’s go say hi to Mr. Wonka before I take you home.”

After visiting with Mr. Wonka, Brady dropped GrapeB back at his island home, and concentrated on his own bedroom at his own house.

When he saw General Mommy, she asked what he’d been doing all afternoon.

“It’s kind of a long story,” Brady said. “And you know what? I helped write it!”

Brady and General Mommy were at Barnes & Noble, because Brady had earned a book! He was going to get something Star Wars, but as they walked by the rack of books, Brady recognized someone on the cover. It was Braden!

They bought the book and brought it home.

Brady started to read the book. On every single page were all of Braden’s adventures – in the classroom, on the playground, and at home!

Brady read the story all the way through. At first, he was surprised that none of the Pagequakes were in the book. But then Brady remembered that the Pagquakes weren’t supposed to be part of the book – they were reminders to Braden to make a different choice! There were some adventures that Braden must have gone on after Brady and GrapeB left, as Brady hadn’t seen them. Braden went back to the playground, and when some kids wanted to play a different game, he said “OK”. He did a great job listening and making eye contact when people were talking to him.

On the very last page of the book, there was a message. It said:

This Book is Dedicated to Brady:

Thank you for teaching me about good choices and for helping me take to the skies like a knight with wings.

YOU ARE A REAL SUPERHERO IN MY BOOK!

One thought on “PAGEQUAKE: Brady Saves The Day!”