Captain AmeriCute wouldn’t open the first Christmas present I ever bought him. Of course, his fingers weren’t working too well at the time, as he was still in the womb. 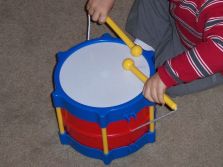 The present was a toy drum. I can’t imagine a life without music any more than I can imagine a life without a beating heart or a set of breathing lungs. So I believed it was a critical Faithful Sidekick Responsibility to share this passion early and often with my favorite Pint-Sized Superhero. Yeah, OK, the fact that it might annoy his parents was a bonus.

The good news was that Brady loved the drum once he finally “came into the out” (as his friend Oh from “Home” would say) and started using his tiny fingers to grasp stuff. The bad news? Well, the drum didn’t make nearly as much noise as I’d hoped.

I’ve continued giving Captain AmeriCute music-related gifts, including a Toys’R’Us version of the keyboard from the movie “Big”, a “Rock’N’Roll Mole” book, and a number of Rockabye Baby CDs featuring lullaby versions of songs from Queen, Def Leppard, AC/DC, and Metallica. Although he ignored most of the CDs, he did take a liking to the Queen one. Woo Hoo!! (Although I hope it’s a few more years down the road before he learns the lyrics to “Fat Bottomed Girls” and “Bohemian Rhapsody.”)

Brady has continued to show an interest in listening to and playing music. He does a highly entertaining imitation of his Great Uncle Hal playing the organ, complete with a serious facial expression and slow head bobs in time to the music. For the most part, though, his taste is influenced by stuff he’s heard on DVD or YouTube – The Wiggles, the Home soundtrack, all of the Shrek movie soundtracks (my heart grew three sizes when Brady liked the Shrek 2 bonus footage of Pinocchio singing “Mr. Roboto”), and The Gummy Bear Song. For those who aren’t familiar with The Gummy Bear Song, click the link. Go ahead. I dare you. Your own Pint-Sized Superheroes will love it, but good luck getting the song out of your head long enough to sleep, cook dinner, or work. You’re welcome.

I’m a big fan of Gretchen Rubin’s book, “The Happiness Project.” One of the passages in the book that really stuck with me was, “…I don’t have much appreciation for music. I wish I enjoyed music more, but I don’t.” Wow. This revelation made me a little sad. (Although, yeah, being a best-selling author would pretty much rock).

But in some ways, I’m also a little sad for the music fans in Brady’s generation. Because music today can be downloaded in seconds to the device of their choice (hopefully legally), they won’t ever experience the rush of emotion that came from walking into a record store on the day of a new release and catching that first glimpse of their heart’s desire on the endcap or in the alphabetized racks. They won’t understand the ritual of delicately picking the album up by the edges, scanning the track listing, paying the cashier (usually $7.99 or $5.99), caaaaarefully slicing through the plastic with a thumbnail (nothing marred the maiden listening experience like a cardboard paper cut), arranging the disc on the turntable, listening to a series of clicks and thumps…and then finally hearing the opening notes.  They won’t know the thrill of reading the liner notes, memorizing the lyrics, checking out the band photographs, and scouring every detail of the cover art. Oh, the album art!

And because information is even more readily accessible than music, the fans in Brady’s generation won’t make a daily pilgrimage to the local grocery or drug store to check out the magazine racks, hoping, hoping, hoping, for a new issue of Kerrang! or Hit Parader or Metal Edge (or whatever magazines happened to cover your own favorite genre.)

Although live concerts are still amazing, Brady’s generation might not experience the sense of energy and community that is created when the eyes, ears, minds, and hearts of every audience member are fully focused on the performance – no one texting, Tweeting, snapping selfies, or watching the show through a tiny LCD screen (ironically missing the concert now so that they can watch it later).

Rob Halford from Judas Priest noted, “The music that touches you in your youth is magnified as you get older. Each record can be a virtual time machine – all you need is to hear a second or two and you go back to that place and time when you first heard it. It’s a brilliant feeling when music touches you so profoundly and stays with you through time.” But with the easy access and ongoing devaluation of music in our society, I worry that Captain AmeriCute’s generation might never develop this long-term connection as they flit back and forth between episodes of American Idol and the latest viral videos on YouTube.

In other ways, though, change has brought progress. Captain AmeriCute will be able to carry his entire music collection in a device the size of a postage stamp wherever he goes – on vacation, at home, at school, at the grocery store, at the doctor’s office, and in the car.

He won’t ever understand the origin of the phrase, “you sound like a broken record.” He will never know the agony of having his favorite cassette chewed up by a Sony Walkman and then spit out in a stream neatly folded tape, like the world’s tiniest accordion. He’ll be able to annoy his parents by playing his favorite song over and over and over again with one click of a button – instead of having to drop a turntable needle in exaaaaaaaactly the right spot or counting one-one-thousand, two-one-thousand while holding down the “rewind” button of a cassette player.

When his favorite band announces tour dates, Brady will know within seconds via social media, rather than wandering around town looking for flyers taped to telephone poles or waiting for weeks/months to read a magazine advertisement or to hear a promo spot on the local radio station. (Although dang, those radio promos were cool).

Then, instead of spending hours and hours standing in line on a cement sidewalk outside a local department store waiting to purchase a concert ticket, he’ll be able to finish his homework, watch some TV, play a video game, take a bike ride, and then buy his ticket by punching a couple of keys on his phone at the designated “on sale” time. (Auntie Kimberly’s anti-heartbreak tip: always double-check the time zone.)

Then when Captain AmeriCute wants to relive that concert twenty, thirty, or forty years later, there will be loads of high-quality footage available for viewing on whatever the preferred portable media player happens to be in 2045 (probably something smaller than a single grain of sand that gets implanted directly in your brain).

If Brady develops a passion for an obscure band or genre of music, he’ll have an unlimited number of options to connect online with like-minded fans from all over the world.

When Captain AmeriCute hears a song he likes, he’ll be able to purchase a copy on the spot. (Remember when your favorite band released a new single to radio long before you could buy a copy of the 45 or the album in stores? Remember hovering by the radio with a fresh cassette tape, waiting, waiting, waiting for those first few familiar notes so that you could simultaneously hit the “play” and “record” buttons?)

Music has not only brought me joy on a personal level, but has also given me a sense of belonging to a larger community and a connection with people I might never have crossed paths with otherwise. Whether it’s through music or something else, I hope Brady finds a hobby that brings the same happiness, energy, passion and sense of community to his own life.  If it’s rock climbing (something he’s shown an early liking and aptitude for), I’ll be there to cheer him on, clutching a steel bucket in a death grip, just in case I get nervous enough to hurl. If it’s golf…well, let’s be honest. If it’s golf, my heart will break a little, but I’ll still be his biggest cheerleader…and I’ll buy him a birdie or a sandbox or whatever it is that you do to show support for a golfer. And if it’s music? (Please let it be music. Please let it be music). I’ll be the one buying him his first electric guitar. And an amplifier. One that goes to 11. Now THAT should make plenty of noise.

Epilogue: No matter the genre, I view all those who are passionate about composing, performing, and appreciating great music as family. So I originally planned to conclude this post with a short “Brag Book” listing artists, events, and nonprofit organizations that have given me the gifts of inspiration, engagement, and connection.  Except that once I got started, it kind of turned into more of a “Brag Encyclopedia”. I found that I could no more stop the words from pouring out than I could stop showing you Cute Nephew Photos if we should ever meet in person. (Fair warning: I have a new SDMicro card. It has a LOT of memory).  So I’ve turned the “Brag Encyclopedia” into a separate post – click here to read on!

One thought on “To the Next Generation of Music Lovers: We Had to Walk Ten Miles In The Snow to Buy Concert Tickets. But the Album Art was Awesome.”